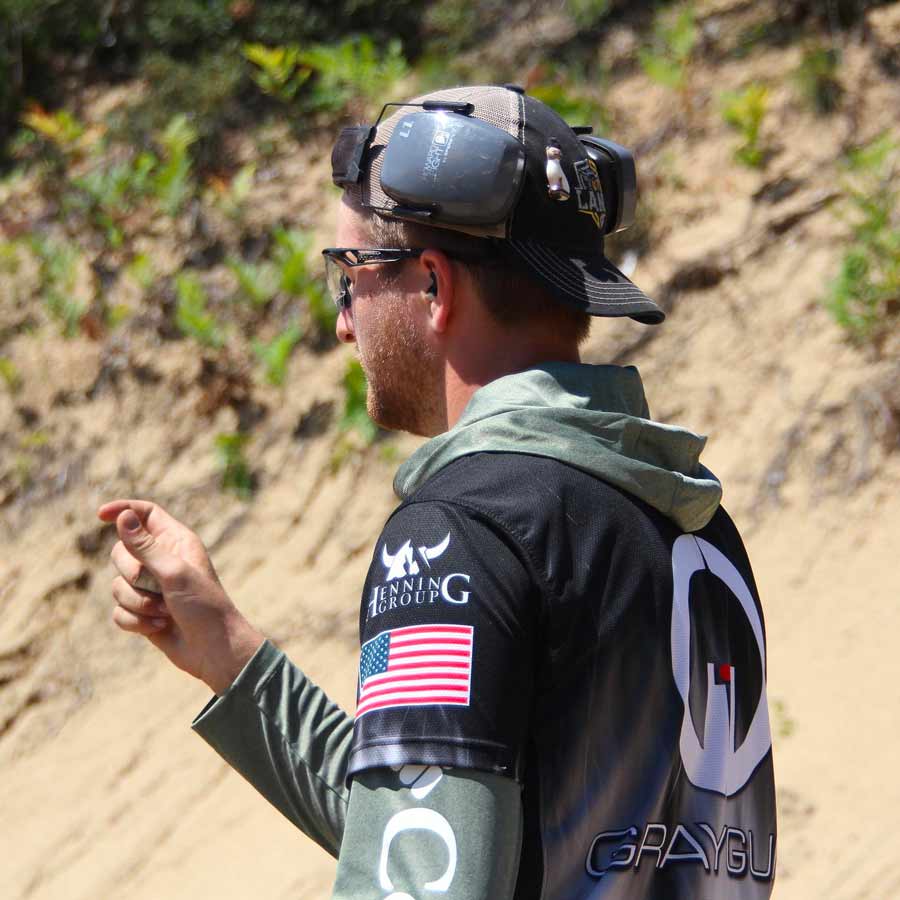 As a competitor, you have to gauge the risk of various stage strategies to know which options reconcile risk vs reward in a way you can live with. I’m proposing a new system of assessing risk on stages: Layers of Difficulty.

Any stage element that can induce a performance error of any type or severity is a Layer of Difficulty.  What constitutes a layer is totally at the discretion of the shooter. Things that seem challenging to a C class dude won't capture the attention or consideration of an A class dude. As a rule, if a thing seems like it is challenging to you, you’re right, that thing is probably a layer. You should choose strategies that mitigate risk appropriately.

The important thing we are considering is how layers occur in sequence and how they overlap on a stage. Diverse challenges in rapid succession are tough, layers stacked several thick are to be avoided.

One layer: A single layer stage element likely won’t capture your attention as a competitor. This is the normal stuff that composes stages. Shooting far targets or a partial targets at an average range from a comfortable position are examples of a one layer strategy.

Two layers: Double layered challenges are largely what creates score separation at matches. When you are presented with a double layer element you are often given a choice to gamble a little bit in favor of a potentially big reward. Lower level shooters will lay up if given the chance at the detriment of their time. Guys chasing results of any level will at least weigh the options and decide based on their skill level. Two layer stuff is pretty much what makes stages difficult and exciting for average to experienced shooters.

A tight timing element, shooting mid-range steel, easy partials on the move, or any overtly "risky" stage plan exists in this space. Many stages will require a shooter to constantly move between sequential and overlapping double layered challenges.

In a sense, great shooters make up time by constantly taking on two layers at a time. If there are easy targets, they’ll shoot them moving. If they can combine positions by shooting stuff from farther, they will explore the option. It's important to consider that combining layers doesn’t universally equal better time, much less score. As an example, if you choose to shoot some harder targets moving and have to shoot dramatically slower - in effect gaining no time - all you’ve done is take on more risk for no reason.

Three or more layers: A strategy this risky is generally to be avoided under any ordinary circumstance. Shooting really tough shots from a funky position or while moving are typical examples. The good thing here is that stage designers don’t usually set stages to require execution on triple layered challenges. More often folks take on excess risk on their own accord by misjudging the difficulty of challenges. This of course can be avoided by using your gut to assess stage elements as layers and only stacking an appropriate number of them.

So what do I do with this system?

If there is an alternative option, don’t take on more than two layers at a time. You have to play the long game by reducing planned risk without slowing down.

There is a lot of room for flexibility and interpretation when assessing what constitutes a layer. When describing a target’s distance, "far" isn’t adequately specific. When you set up a head box only target, virtually every yard added makes a noticeable difference in how hard the target is. So it is fair to say layers can be assessed in more specific terms than whole numbers. A two layer challenge may be shooting some reasonably ranged steel on the move, a 2.5 layer challenge may be doing that in an array with only a few rounds to spare.

In my opinion, it okay to be a little reductive when assessing how layers stack. You probably will not look back on a critical moment in a match and regret playing it safe - at least not to the same extent you'll regret sending it - or choosing a high risk plan where one wasn’t needed.

Using all available information and nuance is good. Just remember that an easy plan executed well will win often win the stage in terms of factor and the match in terms of mistake probability. When using this system, you have to consider the whole picture in terms of what can go wrong (the layers), and listen to your gut.

Posted in Articles and Other News